Mr. Erik P. Lenander was the winner in 1941 of a contest to find an appropriate name for the upcoming Swedish festival being planned in Lindsborg. According to a newspaper article, many contributions were given, but Mr. Lenander’s was distinctive because it conveyed exactly what Lindsborg was trying to do: “homage to the Swedish people for their contributions to the welfare of mankind.” He won $5 for the phrase “Svensk Hyllningsfest.” And so 76 years later, with a brief break during World War II, Lindsborg is anticipating celebrating the biennial event once again.

Originally the idea for a festival was to be in recognition of Coronado as Kansas was observing the 400th anniversary of Francisco Vasquez de Coronado’s expedition to the state. However, given the Swedish cultural stronghold on Lindsborg, the idea was scrapped. It was decided to have a tribute to their forefathers who fled famine and religious persecution to survive plague, drought and the harsh prairie climate. Within this uncompromising nature the forefathers created an environment of cultural standing, music, art and religious freedom. 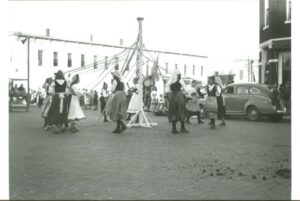 August 2, 1941 was the first preliminary Svensk Hyllningsfest “event” a showing of Swedish costumes. Mrs. Alba Malm Dahlquist was chairman of the costume committee. Many were genuine Swedish attire and used as models for ladies sewing costumes for Hyllningsfest. The showing of these costumes in the Swanson Furniture Store windows (now the Swedish Crown) was the first public attraction of the upcoming October festival.

The Folksdanslag was also created in 1941 for Hyllningsfest but they were originally called the Swedish Folk Games as dancing was frowned upon by some of the elders. Today, the dancers practice year around. In the summer, walking down the street you might come upon an enclave of live music with violin, nyckelharpa and accordion with a circle of dancers. Anyone from small children to the adults can be seen practicing. Students are taught at an early age to sing, dance and play instruments. 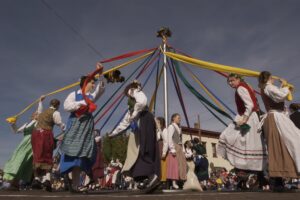 Groups of businesses, organizations, school clubs and church groups meet in secrecy as floats are designed and built to be unveiled in the Saturday morning parade, competing for recognition as the Best Float and the Traveling Trophy. Colorful Scandinavian costumes in the parade and lining the street add color and vibrancy to the scene. The Festival Royalty elected has two requirements: to be over 65 years of age and to have contributed greatly to the Lindsborg community. Currently, Hyllningsfest coincides with Bethany College Homecoming, welcoming alumni and a rowdy afternoon of football with the Bethany Swedes. With special food vendors, arts, crafts, ethnic music and folk dancing, entertainment is continuous throughout the weekend celebration. The Saturday evening Swedish smörgåsbord is legendary. Tickets are sold months in advance. The food is prepared and donated by community volunteers. To give an idea of the volume of food necessary for the smörgåsbord: 6,500 meatballs, 325 pounds of potato sausage, 30 smoked salmon, 60 pounds of pickled herring, 70 loaves of Swedish rye bread, 60 dozen deviled eggs, 45 tea rings, 200 pounds of ostkaka and 30 pounds of coffee. There are more than 35 items on the menu.

Join us for the 76th anniversary of Svensk Hyllningsfest to pay tribute to the Swedish pioneers who settled the Smoky Valley.